What The Heck Are You Waiting For?

The other day I was talking to a friend of mine and I was explaining to him how I'm going to get out of the trucking business.

I like doing it. I just don't want to do it forever. And the thing is, I would really like to stop doing it before I don't like it.

There are a lot of people out there that hate their jobs, and I think that's really tragic.

If you're doing something that you hate, you should change as quickly as possible. Because you spend far too much time working and it becomes too big a part of your identity to hate what you're doing.

I think if you love what you're doing for your money, you'll do a lot of it and you'll make a lot more money.

It's a concept that's very important for you to get, the younger you are. I've had it pretty good in my life where I've changed my job in different places.

Well, that went away and then I drove for a while. I've been... as a civilian, I went to Afghanistan and Iraq and I also drove a tow for awhile. A tow truck in California.

You do these different things and it's, it's so important to stay involved and engaged and really dig in. What you're doing is... if you don't, you're unhappy most of the time.

I always say, “Don't hate your job because that's the goose that lays the golden eggs.”

And you know what? If this doesn't work out, when you're switching job to job, you don't have that fear as much. Because hey, you know, you get a job and then someone pays you and you get money. But when you're talking about business, it's all on you. If you don't perform, if the stuff that you're marketing doesn't sell, or if you can't learn to do what it is you want to do, then it's all on you. And that's a real drag.

But here's the thing. You can't just keep doing what you're doing to get ready to do what you want to do. Yeah. I'm not the best example of this as far how I personally lived.

But what I want to say is you've got to do what you want to do and work into it. It's the best way to put it. The younger you are where you've got... you don't own a bunch of crap that you will hope to have money for payments on and everything.

It's why it's best to get rid of most of your stuff and get rid of all that. Lower your overhead so that you have more wiggle room.

But even when you get older, 9maybe especially when you get older), you've got to just do what you want to do because trying to save and get ready to take that plunge, something always happens in my... it makes me choke up all the time.

I say this, but you should watch the beginning portion of the movie Up.

It shows this old man when he was a kid and he meets this little girl that lives down the street or whatever, and they become friends. They get married, and all through their lives, they show their dream of traveling here and there and doing all this different stuff.

And no matter... as their life goes on, she gets pregnant. There goes the money, they gotta spend it on the baby. And then some other things. How do they buy a house? And all these normal things that happen in your life. And then she gets sick and he spends all of his money. And she dies and nothing ever happened.

And it's so sad because most people live their lives exactly that way. And they never take that plunge and do what they want to do because they're saving up in there waiting for the time when they're ready, when they got it all set.

It's not going to happen.

At least I've never seen it.

If you could do it, you know, good for you. But for the rest of us, you've just got to take the plunge and get on the path that you want to be on and then make that path work, instead of attempting to build it to where you can just slide right in.

Everything's cool because that is not going to happen.

You will make it work the same way you did everything else in your life, but you've got to get going on their path because waiting for it, it'll never come.

So if you're thinking about doing something, that's my tip for today.

Get out there and do it. You can. You will make it work.

This will show you how.

Until tomorrow, have a good one.

Back to member profile >>
This article was published on 21.08.2019 by Dave Kotecki
Author's business opportunity:

David Tupica Nice article, but sadly I’m Old School. Network Marketing is a people business and a personal development business that builds leaders. I Would love to teach you.   3 years ago 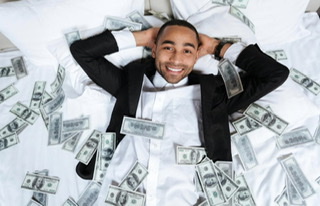